We collected the bubblegum cards and bought the teen magazines.  We put up the posters and wondered what Danny and Sandy might be doing, like, right now.

Oh sure, I had the ability to separate reality from fiction, just no desire to do so.

I loved Zuko/Travolta. And I really, really loved Sandy/Olivia.  They looked so good together, it was a crime.

This was a perfect summer blockbuster popcorn movie – even in the dead of winter.  A sweet romance with just the right amount of adversity, humour and gentle life lessons, wrapped up in irresistible music and timely nostalgia.

Instantly, I was transported to a beach in California to the grandiose melody of “Love is a Many Splendored Thing” for a bittersweet summer romance.
- “Danny, is this the end?”
- “Of course not, it’s only the beginning.”

Then the funny, frenetic animation – quite possibly the best opening credits ever – to the tune of another impossibly catchy song.

First day of school.  Jocks, nerds, tough guys – all these concepts were totally foreign to me, yet so readily familiar, it was like I had known them my whole life.

It didn’t bother me one bit that people spoke French yet sang in English.

I am still hopelessly devoted to Olivia Newton-John.

There are moments in life that change you.

[2]  This is my official apology to Maria Gastaldi’s sister: I’ve lost count, but I’ve seen the movie (in English) over 100 times – on Betamax, on VHS, on DVD, and also back on the big screen, both for its 20th anniversary re-release in 1998 and more recently, in its sing-along version.  Grease is still the word.

It seemed totally natural that they should break out in perfectly choreographed song & dance at the drop of a hat to express their innermost thoughts.

I had no critical distance to question why an entire school year seems to take place within a month.
I didn’t know what it meant to get “lettered” in track.
I just “got” it.

All these beautiful people singing and dancing, the cereal-box colours, the music, the energy… It was magic, just pure magic. 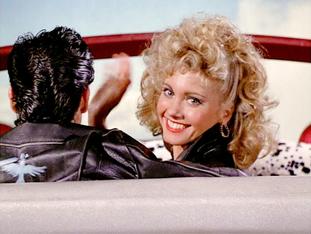 It's only words.  And words are all I have.

When I was 9, I went to the movies for the very first time.

It was a cold Sunday afternoon in January 1979, and after much begging and pleading, the neighbour kids had managed to convince their dad to take them to a matinée screening. There were no cineplexes in the suburbs back then, so this required a trip into town.  It was a very big deal.  And lucky us, my sister and I got to tag along.

For months and months, we had all heard about this movie relentlessly – from our friends at school, our cousins, other kids on the street...  Maria Gastaldi claimed that her older sister had already seen it 7 times.

Seven!!  Pffft, I thought to myself.  What a waste of time!

Sure, I had re-read many adventure novels over and over again – happily – but that was out of necessity.  The tiny library in Boucherville had long ago run out of new books for me to sign out.

When Sandy appeared in her black leather get-up and luscious curly locks, the Shake Shack shook me to the very core.  When that shiny red convertible achieved lift-off, my heart soared along with it to that malt shop in the sky.  When Olivia turned around and smiled, she was looking at me.  She was waving at me.

I knew it was only an au revoir.  You don’t get that feeling in the pit of your stomach too often in life.

We rushed out to buy the soundtrack with our allowance money.  We wore out the double vinyl album – especially Record 1, Side 1, which had all our favourite songs – playing it in a continuous loop for months on end.

Luckily, our parents didn’t seem to mind.  Heck, they even knew a couple of songs already.

We marvelled at the clever high-school yearbook album design and transcribed the song lyrics. I was the only one who spoke English, so I became the official interpreter.  “Summer Nights” was easy enough to translate, but “Greased Lightning” proved more arduous.  “It’s about the fast car” was all I could muster. 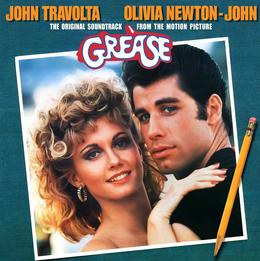 But this movie did seem to be some sort of phenomenon, and perhaps our parents realized that they risked permanently damaging our cultural IQ if they didn’t let us be a part of this pop culture tsunami.

Finally it was decided that Mr. Dubé would drop off the five of us at Place Versailles and come back for us two hours later.

I don’t remember if there was popcorn involved, or gummy bears, or slush-puppies.  But as I sank into that big plush seat and the lights went down, I felt a definite frisson hearing the film reel crackle through the projector in those last couple of seconds before the giant black screen lit up.

To this day, that crackling remains one of my very favourite sounds in the world.

And so it began.

There are moments in life that change you.

I don’t mean graduations or weddings or the birth of a child.  Those are obvious Big Moments – the ones that are foreseen, planned, thought out.